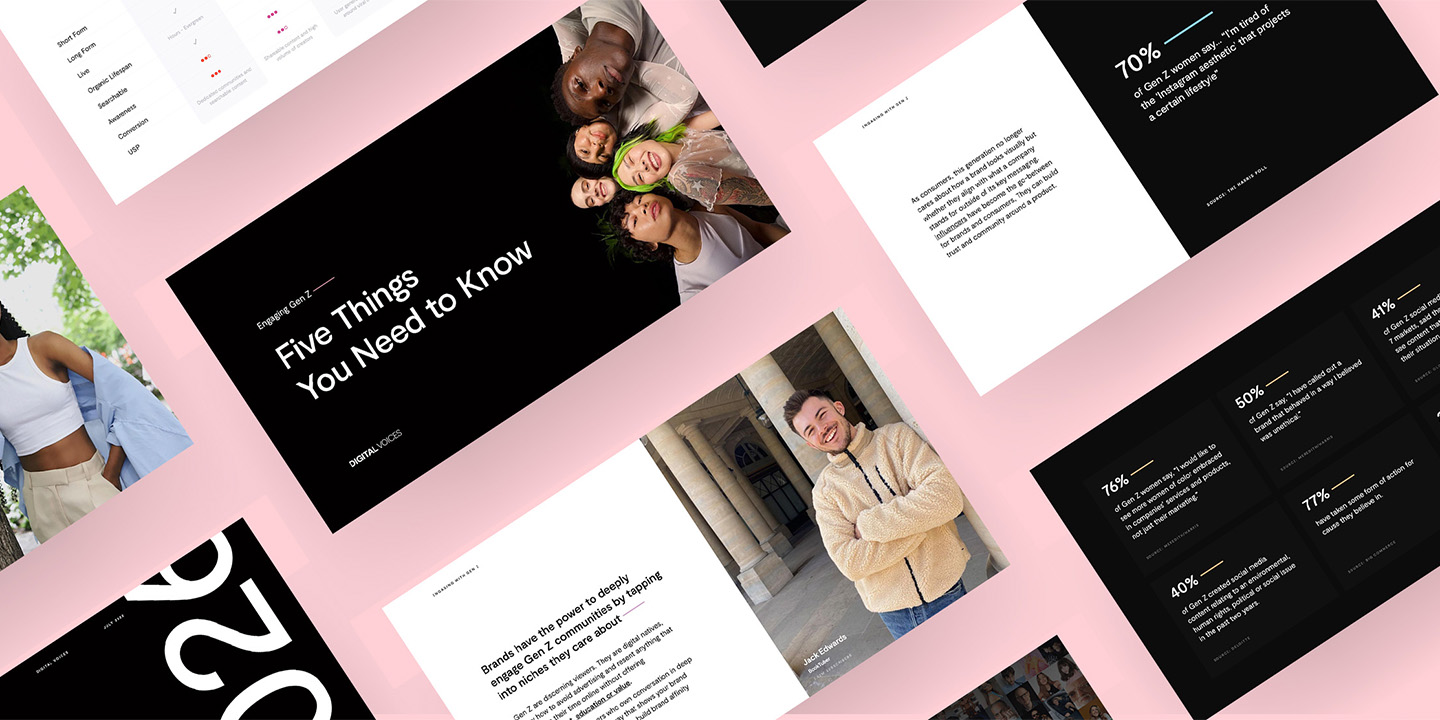 How to engage Gen Z with influencer marketing

There’s no doubt that Gen Z are shaping the influencer market - their presence is quite literally felt everywhere in the digital space. From their impact on TikTok’s exponential rise to their ability to make a product trend, Gen Z are very much the now generation. According to Insider Intelligence, Zoomers are set to become the most pivotal generation in the future of retail, with many predicted to have huge spending power by 2026. And yet, many brands still struggle to reach this demographic.

For brand marketers looking to capture the hearts of Gen Z and optimise their digital strategy, particularly with women of this generation, Digital Voices have gathered insights on how best to engage with Gen Z.

Generation Z - also known as Gen Z, Zoomers or post-millennials - are the generation born between 1997-2012. They grew up during a time of fast-paced digital growth, making them tech-savvy and hyper-connected to the internet. As a result, a lot of their decisions and actions are informed by social media.

When it comes to their characteristics, Gen Z are more progressive and care about social causes such as climate change, racial discrimination, mental health awareness and the advancement of LGBTQIA+ rights. For this reason, they are drawn to brands that share similar values to them and aren’t afraid to boycott a brand that goes against their beliefs.

Authenticity has become a major factor in how Gen Z assesses and distinguishes brands when purchasing products. As consumers, this generation no longer cares about how a brand looks visually but whether they align with what a company stands for outside of its key messaging. This is why influencers have become an important factor in acting as the bridge between brands and consumers. They serve as the go-between that can build trust and confidence about a product with a prospective Gen Z consumer.

Research carried out by the Harris Poll found that two-thirds of Gen Z women believe that "social influencers are more important for showcasing brands than the actual brands themselves". What the brand has to say about itself matters less than what an influencer has to say about the brand.

Since its arrival, TikTok has become synonymous with Gen Z. So much so that it has been referred to as “the app that defines Gen Z”. Things even took a pivotal turn towards the end of 2021 when TikTok.com surpassed Google as the most popular web domain, officially becoming Gen Z’s go-to search engine and trusted source for discoverability.

For Instagram, according to Hootsuite, the former photo-sharing app is still Gen Z’s favourite social platform. It was also one of the most influential advertising channels among female Gen Z users when making purchasing decisions.

When it comes to the engagement rate between the two platforms, TikTok is significantly higher. But, TikTok content has a much greater fluctuation in performance than other platforms, as most users choose to engage with content through the #ForYou algorithm rather than by consuming the content of accounts they follow - unlike its rivals. Instagram however is moving towards video content through its short-form offering Reels, which will likely increase their engagement rates.

So, to conclude, it isn’t necessarily a case of which platform is better, but which best suits your brand and what you’re hoping to achieve out of a campaign.

Contrary to popular belief that Gen Z only consumes short-form, they are in fact the age group most likely to consume long-form content. A report by Global Web Index (GWI) found that Gen Z are just as likely to be watching 20+ minute videos as they are < 4-minute videos. In addition to this, 77% of Gen Z visit YouTube daily.

In-depth content holds greater retention than bite-size clips. The report additionally highlighted that this is explained by younger consumers' appetite for how-to-videos and vlogs. For marketers, longer content on platforms like YouTube is a key way to reach young consumers, with one in four consumers watching a video made by a brand each month. Being able to understand these variations in Gen Z’s behaviours gives agencies and brands the ability to not only drive engagement cross-platforms but experiment with content through different formats.

One of the most common findings when observing Gen Z is that they are more socially minded, cause-led and activism-aware than those before them. As the most culturally diverse generation, brands that don’t reflect their values or respect their needs will be quickly called out or “broken up” with. 78% of Gen Z women have broken up with a brand for some reason. While 41% of Gen Z social media users said they most want to see content that’s relatable to their situation.

Gen Z want brands to make them feel valued (37%), offer customised or personalised products (30%) and even support charities (30%). Brands should consider this in their social and marketing strategy.

Find out more about how to engage Gen Z - download the report now.