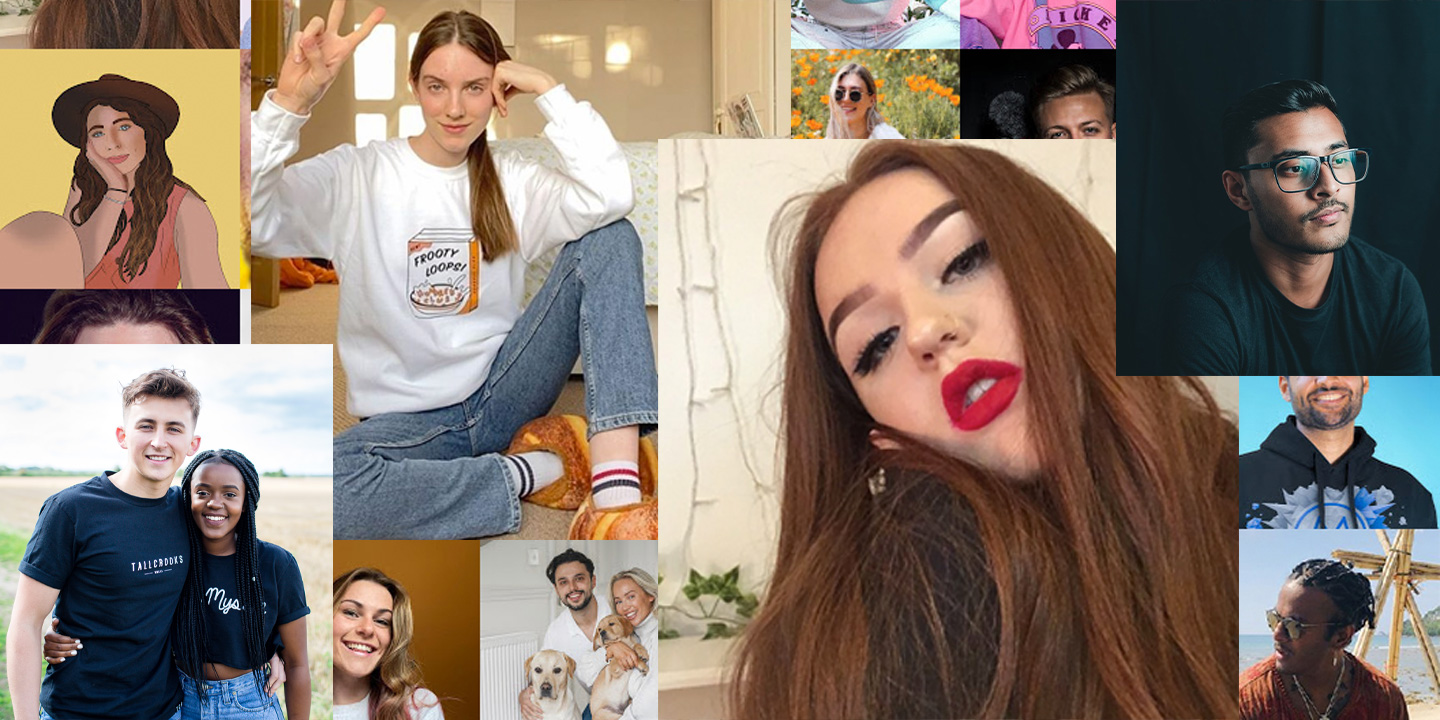 Why Rising Stars are the Future of Creator Partnerships

Allow me to paint you a picture. The year is 2012. TikTok is but a twinkle in Musical.ly’s eye, Instagram only has 27 million active users, and Gangnam Style has become the first video to surpass 1 billion views on YouTube. These were simpler times. Content creators were quickly becoming the hottest thing on the internet, known predominantly for uploading make-up & fashion hauls, and challenge videos… The “Golden Age” if you will, and I was proud to be one of them. Creating bespoke YouTube videos 3 times a week alongside my twin brother, and being earmarked by YouTube as “one to watch”... Ah, what a time to be alive.

In the UK, this phenomenon was spearheaded by a finite group of creators who, for better or worse, went on to typify what it means to be a YouTube creator in the eyes of the public, brands, and traditional media, for the best part of a decade.

Fast forward to present day, and even now when most people think of YouTube creators, these lifestyle vloggers come to mind. They’re not wrong - lifestyle creators still have a presence on YouTube. But they aren’t seeing the full picture. These creators represent but the very tip of a very large, very diverse, and very underutilised iceberg of creators who have been quietly reforming the platform over the past five years. Things have come a long way since the cinnamon challenge caused mass asphyxiation (Tide pods, anyone?) in exchange for a viral hit.

A Haven for Niches

YouTube has become a haven for niche creators. That is, creators who are consistently creating content around a particular theme or topic attracting an audience which shares a passion for it. What we’ve seen over the past few years is how this dramatic rise in popularity of niche content has created a safe space for people to connect around content they care about, building enormous, but tight-knit communities in the process.

60% of consumers who watched something on YouTube in the past 24 hours say that it was directly related to something they were passionate about. Moreover, content that allows viewers to dig deeper into interests is 2.7x more important to them than content featuring celebrities. (Think with Google)

How did it Start?

The way you and I use YouTube is truly unique (unless you’re obsessed with Pokémon, too?). However, one thing remains the same - it’s deeply personal. We’re actively seeking out and engaging with content that personally resonates with us in the moment.

This benefits YouTube itself in multiple ways. Not only are audiences watching more niche content, but they are also spending more time engaging with niche content. Because of this YouTube is able to run more targeted ads, and the platform is able to pay creators a higher CPM - it’s a win-win scenario for the platform and its creators.

The algorithm has gone through some changes too. When I first started to create content on YouTube back in 2012, YouTube best practice was uploading short, snappy videos (between 2-4 minutes long) as frequently as possible. Now, the algorithm rewards channels which upload longer videos around a theme that resonates with topics explored on their channel. Creators who follow these golden rules are growing huge communities of their own, presenting endless opportunities for brands to capitalise on this untapped potential.

I decided to test this. It had taken my brother and I four years to get to 200,000 subscribers before our growth stagnated. We launched our channel towards the end of the “golden era” of vloggers being able to throw out sporadic content around dislocated topics, with no uniting theme other than they themself featuring in each video. It was during this time we’d partnered with all manner of brands - from banks and fizzy drinks, to holiday destinations and mobile gaming apps.

At the start of 2018, after a successful podcast with BBC Radio 1 which skewed towards discussing Kpop music in the last 2 seasons, I decided to launch a Kpop channel.

However, being Kpop wasn’t enough of a niche. My brother and I refined this even more - let’s make it about Kpop and its impact on the UK music scene. It paid off - without cross-promotion, our channel shot to 30,000 subscribers in less than 10 months and had generated over 4 million views. What struck me more was the kind of engagement the channel would receive - viewers would leave lengthy comments about a particular opinion. Always respectful, but excited to give their point of view.

The way we navigated sponsored partnerships also got “smarter”. We’d receive a brief from a brand but would spend time advocating for a different approach or piece of sponsored content that felt more at home (and relevant) to a Gen Z audience interested in Kpop in the UK. Perhaps the most relevant and natural sponsored opportunities were with the SSE Wembley Arena and O2 Music. For each of these opportunities, we worked closely with the brand team to ensure that their key messaging was clearly explained, but integrated into content we knew our audience would enjoy.

Similarly, other creators who produce content around particular themes and topics - like Eleanor Neale, a UK-based true-crime creator - have quickly become Rising Stars on YouTube. At Digital Voices, we use the phrase Rising Star to describe a creator who is growing an engaged community around their content and continuing to generate a growing number of views across their videos. They normally have more consistent views than subscribers. These are also often creators who haven’t previously partnered with a brand.

We partnered with Eleanor Neale for our BBC Sounds campaign. We worked with Eleanor to decide on which BBC Sounds titles she genuinely loved and wanted to include in her content. She focused on discussing true crime podcasts on BBC Sounds which not only ensured her authenticity, it also inspired enormous affinity between her audience and the content available on BBC Sounds.

These creators are succeeding because they’re creating content that personally connects with their audience or meets their needs in the moment. Audiences have a great deal of respect for the time they invest on the platform and want to use it wisely - they want to learn more about what they love, or engage with like-minded individuals seeking a sense of familiarity. But what does this mean for brands looking to connect with new consumers?

It’s clear that when viewers are choosing what to watch, the most important thing is that it is relevant to their interests. In fact, content relating to passions is 1.6X more important to a viewer than whether or not the piece of content has high production quality (source.) YouTube creators excel here because they build relationships with their audiences based on their personalities -not (at least not always) their production quality. Brands should relate and trust the inherent creativity of Rising Star creators and be willing to co-create with them - these creators know how to connect with their audience, so let them do it.

When it comes to authenticity, YouTube creators have it by the bucket-load. Brands only stand to benefit from this authenticity so long as sponsorships are a natural addition and are seamlessly integrated into content. Brands come unstuck when they try to shoe-horn key messaging into a creator’s sponsored content. Ensuring authenticity is paramount to a creator’s relationship with their audience, and how effective their advocacy of a product is. Co-creating content with a creator will ensure they feel that their opinion is valued by a brand, and their relationship with their audience is preserved.

Much like cable TV and it’s myriad of channels, creators are continuing to refine the way they produce content on YouTube and their supporting socials. To this end, creators are empowering YouTube to increasingly eat into TV world’s ad revenue. In its Q1 2021 results, YouTube reported a whopping $6 billion in ad revenue, which sets it on track to beat its rival Netflix’s yearly earnings.

Creators have adapted over the years, leaning into popular topics or launching new channels around a dominant theme which is presenting a unique opportunity for brands. Interestingly, creators are also quickly adapting to new viewer behaviours - last year over 120 million people in the US alone chose to primarily watch YouTube on their TVs.

YouTube reaches more 18-49 year olds than linear TV channels combined. It offers audiences content from different races, genders, sexualities, abilities, and consistent diversity which isn’t seen in traditional media. Viewers come to YouTube to spend a long time watching content that matters to them, from creators who they feel understand them, connect with them and build community. YouTube creators offer a seemingly effortless way of engaging with diverse audiences as an always-on tactic, rather than just for special tentpole events.

Rising Stars across all verticals are plugged into the now, and offer brands a chance to utilise their authenticity to impart a greater understanding of their product or key messaging in new ways. These new ways are more relevant and important to an audience, increasingly turning to connected viewing over linear TV. Brands who trust creators’ inherent creativity and their ability to speak directly to their audiences will maximise their results and earn themselves an authentic ambassador in the process.